About two weeks ago, after the Lyme Regis Museum‘s fossil walk on the 27th August, there was an interesting find on the Church Cliffs landslip east of Lyme Regis.

Paddy Howe, fossil walk leader and the museum’s resident geologist was walking back from the end of the walk with myself and Chris Andrew (the museum’s education officer) when he spotted something in the shales of the landslip… 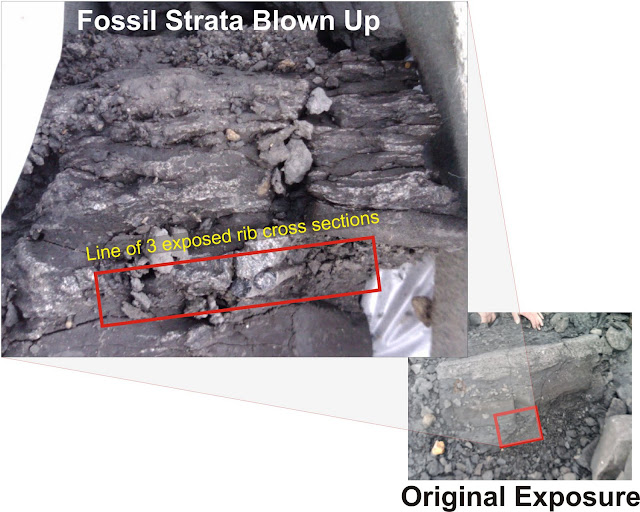 Rib cross sections visible in the shales of the church cliff landslip.

…There were only three small (approximately 5mm in diameter) cross sections of ichthyosaur rib bone that could be seen in the shale layer he had spotted. When some of the shale was removed however there could be seen a small number of holes in the shale where other ribs had been. This immediately caught Paddy’s attention as it meant that there could be a significant portion of an animal fossilised in this spot, but with the tide rapidly approaching it was necessary to return the next day, so the find was carefully covered to prevent further erosion and we burned the location in our minds, determined to return on the Sunday. 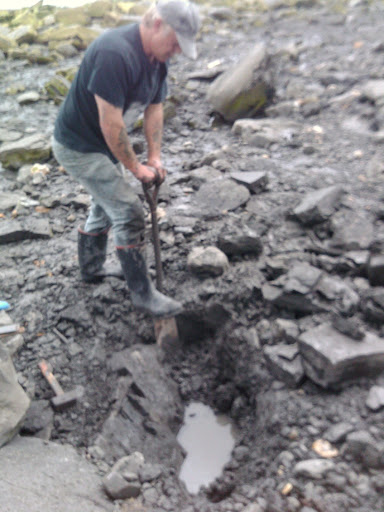 Had the fossil survived the night? Had another fossil collector discovered and excavated it? or worst of all, had it been destroyed by the tide?

After some not inconsiderable trepidation during the Sunday mornings fossil walk, we three returned to excavate the slab containing the ribs that had been spotted the day before. To my amazement – and I am sure; Paddy’s relief – the slab had survived relatively undamaged and so the excavations began.

The first task was to remove as much of the surrounding material as was possible, and this was done through the liberal use of a hammer, chisel and shovel… and took about 30 minutes to complete. This done, a more careful investigation of the slab could be made, which raised far more questions than answers because at first inspection there appeared to be no further bones in the rock! Had we wasted our time digging around this slab when all we would find were a few rib fragments?

Thankfully not, more bones were eventually seen, after some mud and shale was washed off of the newly exposed surfaces, so now the task was to remove the block – preferably  in one piece – for preparation and exposure of the whole fossil. 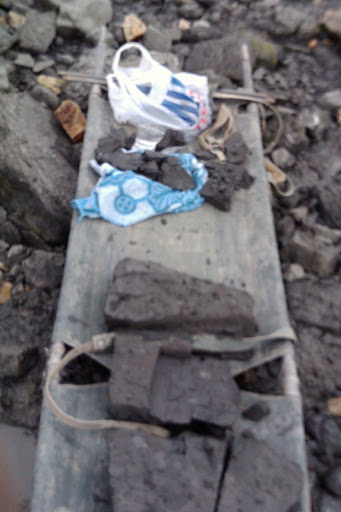 Slabs of rock collected together on Paddy's stretcher. (this is only half of them!)

Disaster – or near disaster at any rate – struck a few minutes later when the slab split, not once, but many times, leaving us with a large number of small blocks and a jumble of loose bones at the bottom of the hole. This was a mixed blessing in that it made the fossil easier to get onto the stretcher (the only method of transporting the remains) but as the hole was rapidly filling with water and all of the bones of the skull (the lower-most bones in the slab) had been disarticulated. Sifting them from the mud may have resulted in some being lost lost in the pool of muddy water. Sadly we will never know.

The final task now facing us was to get the remains of the slab off of the beach, which was to take an inordinately long time thanks to both the weight of the slabs, and the ungainly and distinctly uncomfortable nature of the ex-army stretcher we were using. This process took approximately an hour and a half, and yet we only travelled about half a mile along the coast back to Lyme Regis. Including some impromptu outreach along the way to interested tourists! 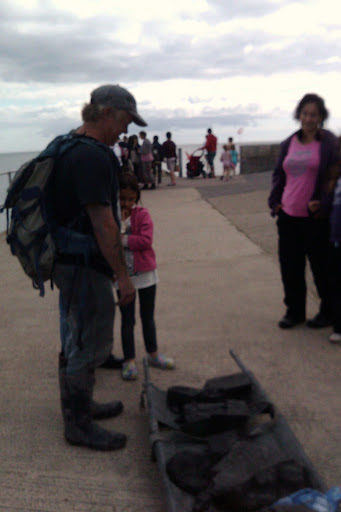 Paddy undertaking some impromptu outreach with holiday-makers and the Ichthyosaur fossil.

The slabs have now been passed to a local fossil preparator, who will work hard for a couple of months to release the fossil from it’s muddy tomb and carefully piece the jigsaw back together. Unfortunately we won’t be able to identify the animal to a species level until this work is completed, and even then only if all the diagnostic features are available… only time will tell if that’s possible.